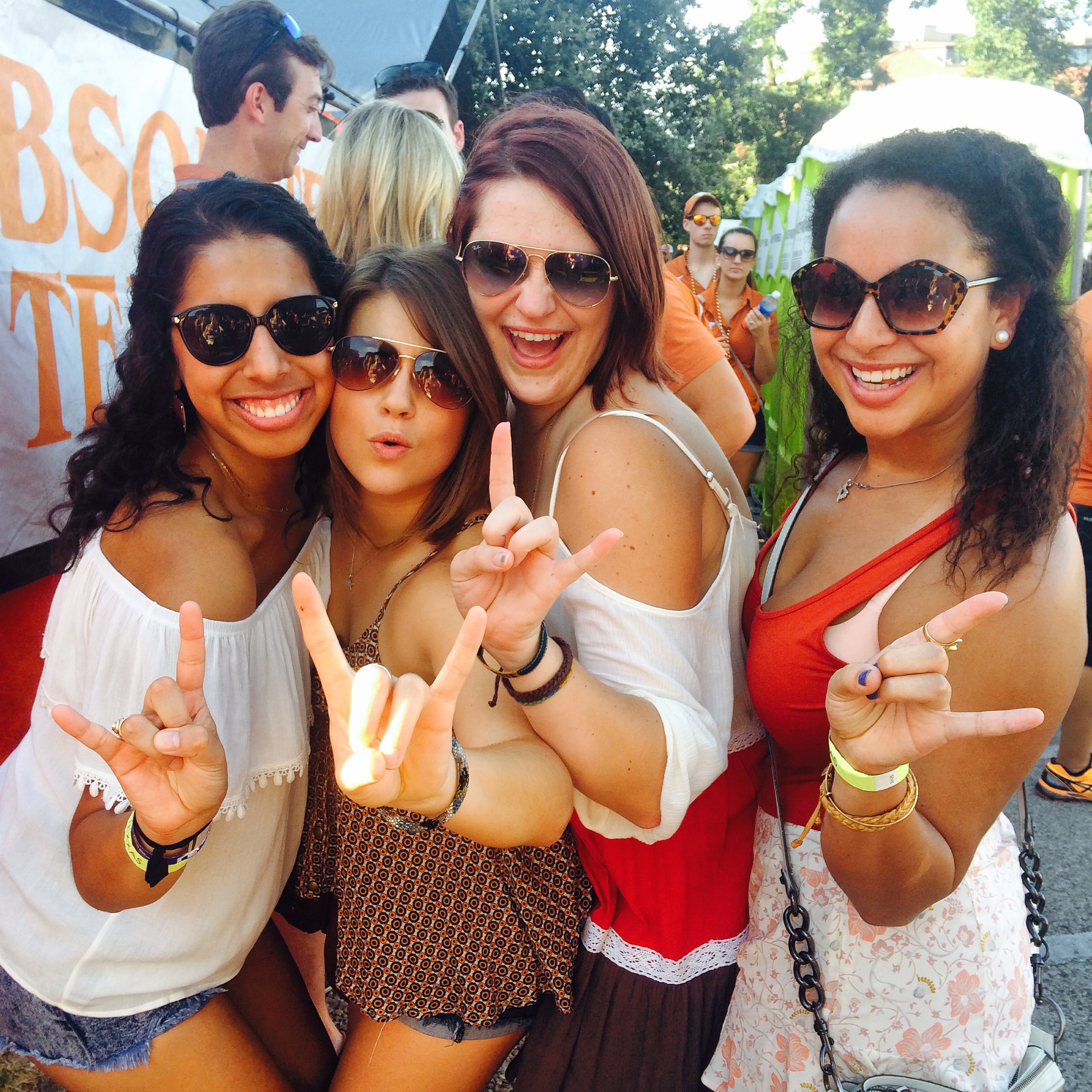 The greatest time of the year is upon us…football season! The NFL regular season kickoff is basically a week away, but as of yesterday, college football is here and I am just really, really excited about it.

Tomorrow, the Texas Longhorns kickoff their season playing Notre Dame just a couple hours away from Chicago! As of now, Eric and I aren’t attending because we can’t pay the arm and leg required for entry (ok that’s an exaggeration kind of), but that won’t stop us from cheering on our Horns. We have plans to head to a local UT bar called Stanley’s that has big watch parties each game day! Apparently the totally change out their menu to serve bbq and queso and Texas Teas, and it sounds like a Texan’s paradise.

In honor of this new season starting, I thought I’d share some of my favorite things about Longhorn football, because I’m so going to miss being there at every home game! 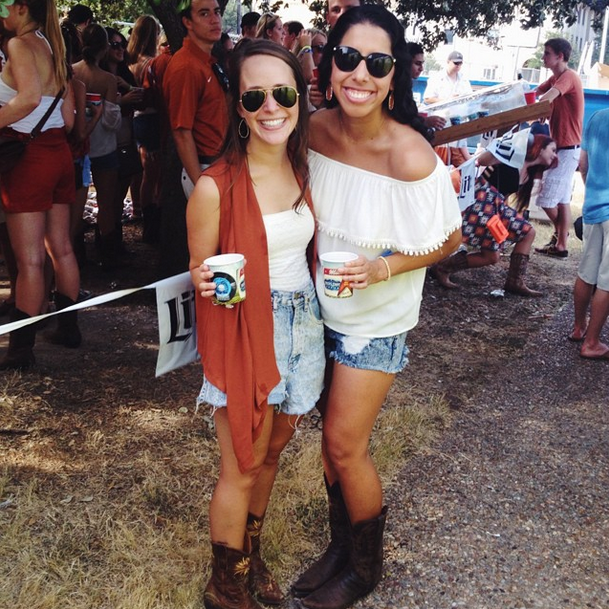 2. Game day outfits // I usually attend sporting events super casually – think jean shorts and a team t-shirt – but one of the things I grew to totally love at UT was the fun in shopping for burnt orange and white pieces to throw together a cute game day ensemble. My favorite local Austin boutique where I always had luck (including that white top above) is called Longhorn Fashions, I highly recommend it, ladies! And then of course these Kendras (above on me, and below on my sis) are a staple!

3.  Bevo // I’m convinced the Texas Longhorns have the greatest mascot ever. Bevo is not only huge and magnificent, but he’s super spirited and cooperative, just chillin’ in his little corner with his hay bales each game. We’re obsessed with him. If you need anymore convincing or want a smile on your face, do yourself a favor and check his Instagram or Twitter accounts out. 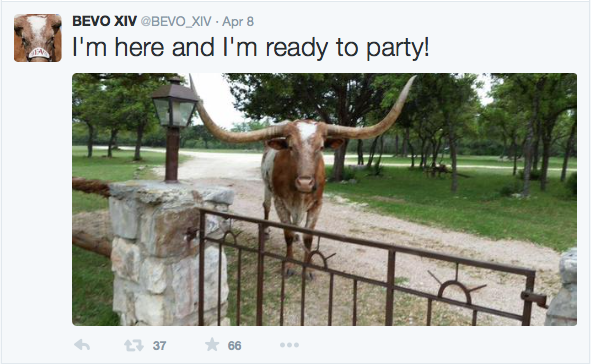 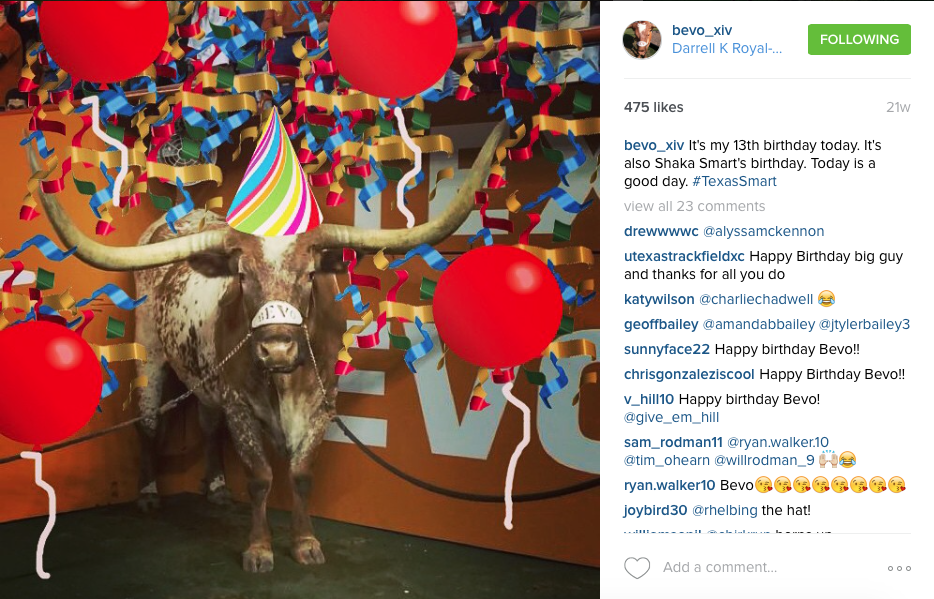 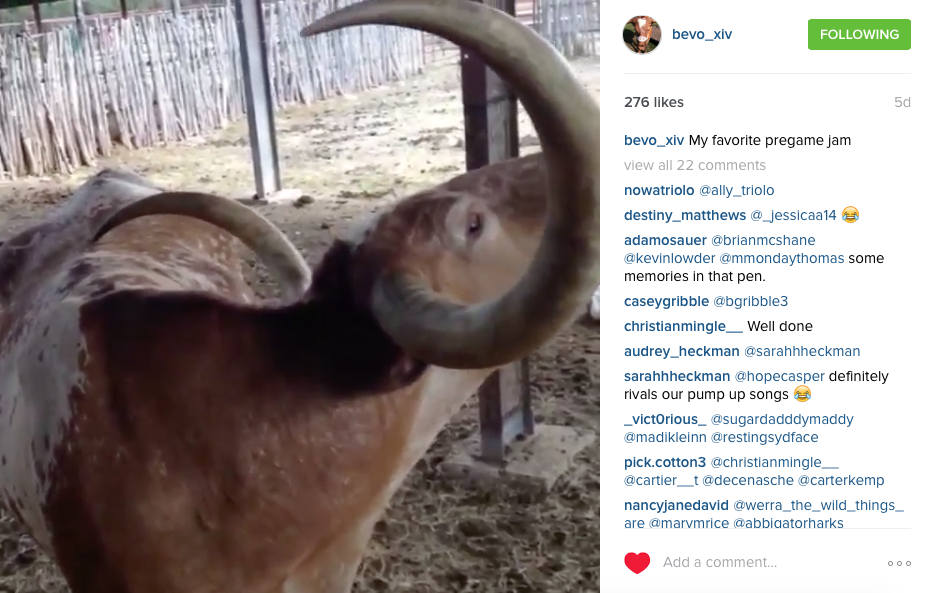 This is actually a video, he’s scratching his back to Jay-Z’s “Dirt Off Your Shoulder.” I can’t handle him.

4. Seeing Eric on the field // For those of you who didn’t know, Eric was in Texas Cheer and had so many awesome opportunities through the program – from being on the sidelines every home game, to flying across the country for TV appearances and supporting the team at away games. He even got to meet Texas Ex Matthew McConaughey at an appearance the team did one time…not bitter or jealous or anything about that one at all. Getting to see him cheer on the field, having a blast with his teammates, and waving to me whenever we could find each other are some of my favorite memories! 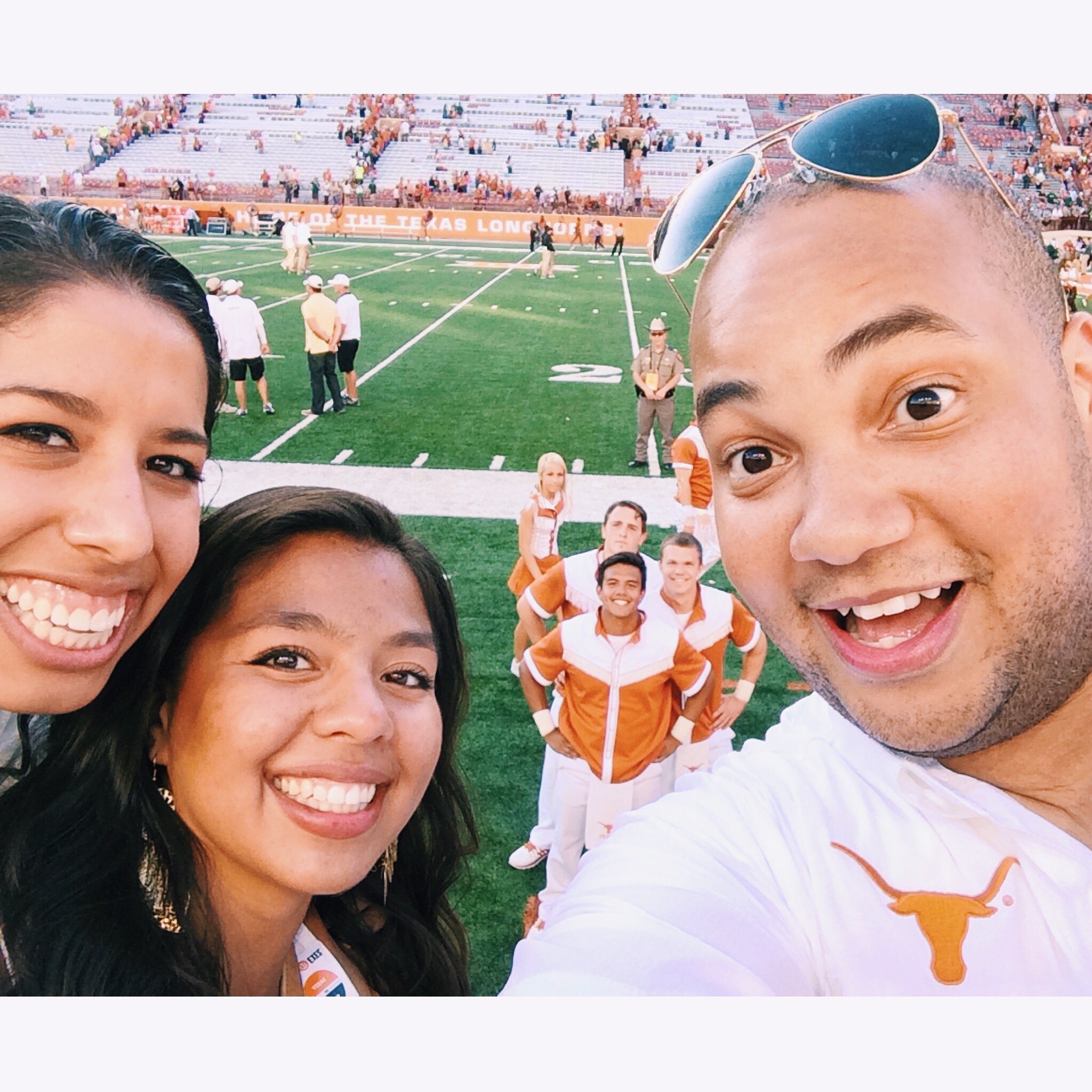 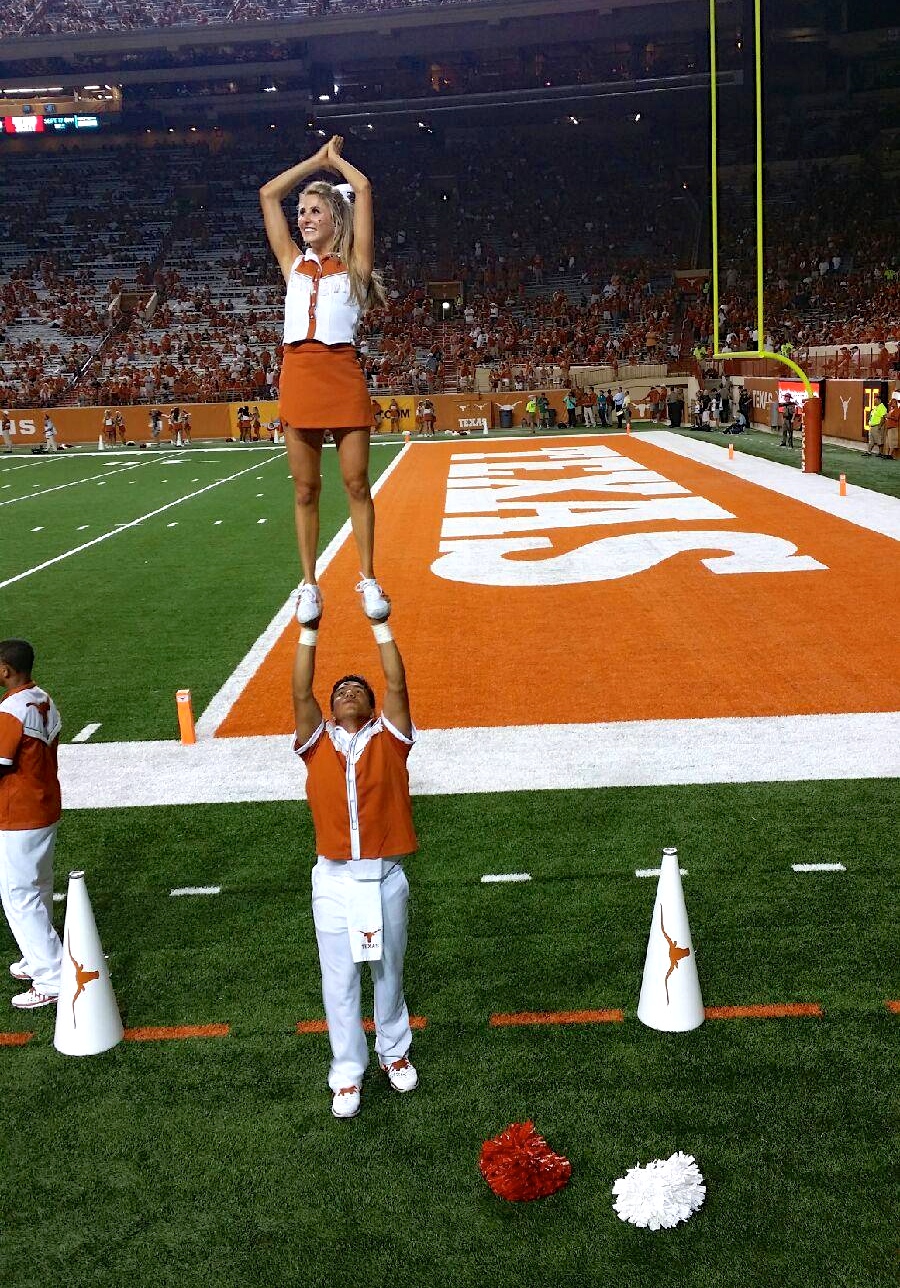 5. The Eyes of Texas // At the end of the game win or lose, the team and the fans sing UT’s school song The Eyes of Texas. I just love this tradition and pride that unites everyone! It’s obviously the absolute best when we win, because everyone is fired up, raising their horns, and we watch the tower be lit up that beautiful burnt orange. 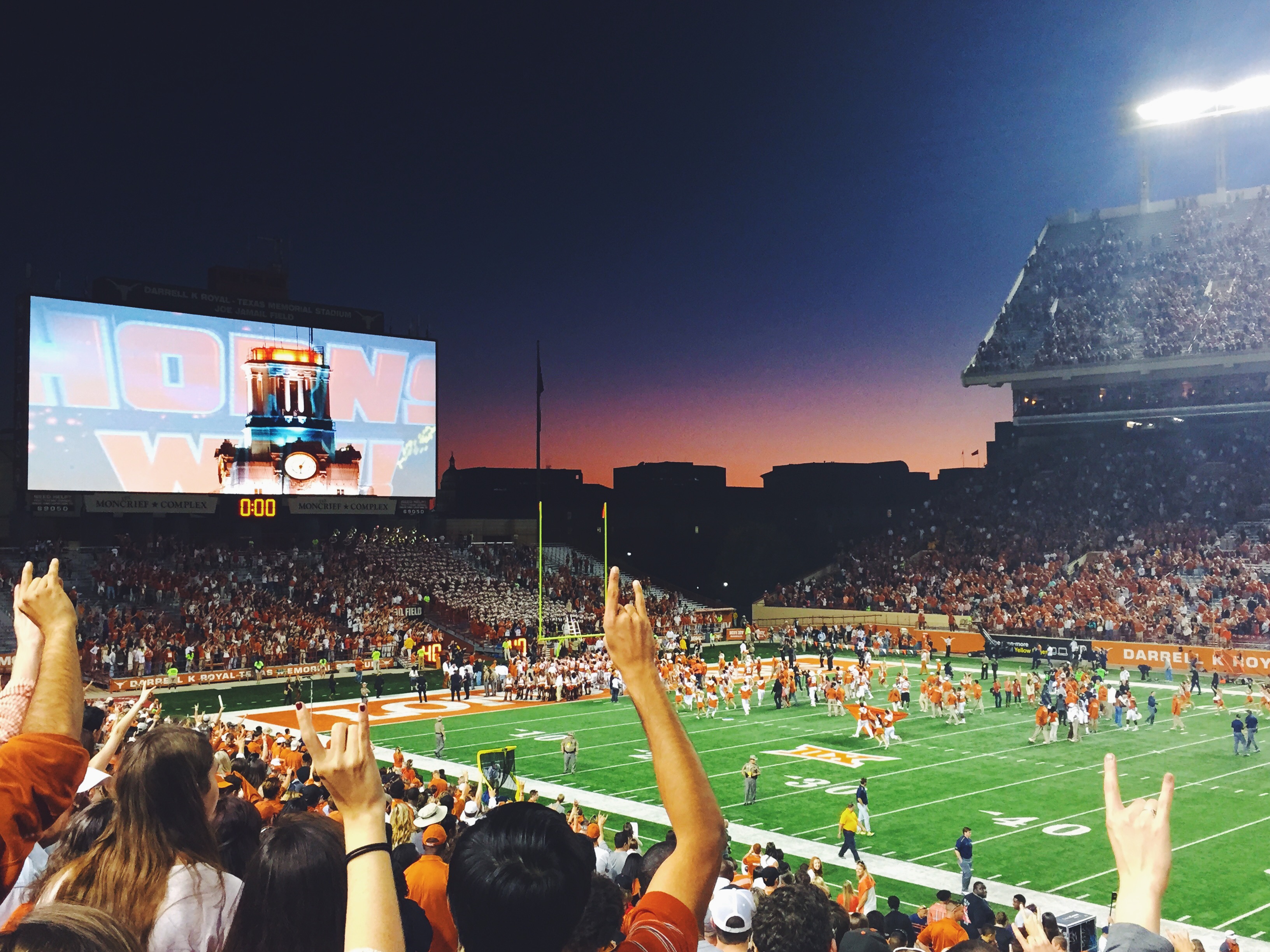 What are your favorite UT or college football memories?? Hoping for the best for my Horns this weekend, I can’t wait to dress up and cheer them on with our friends here in Chicago!