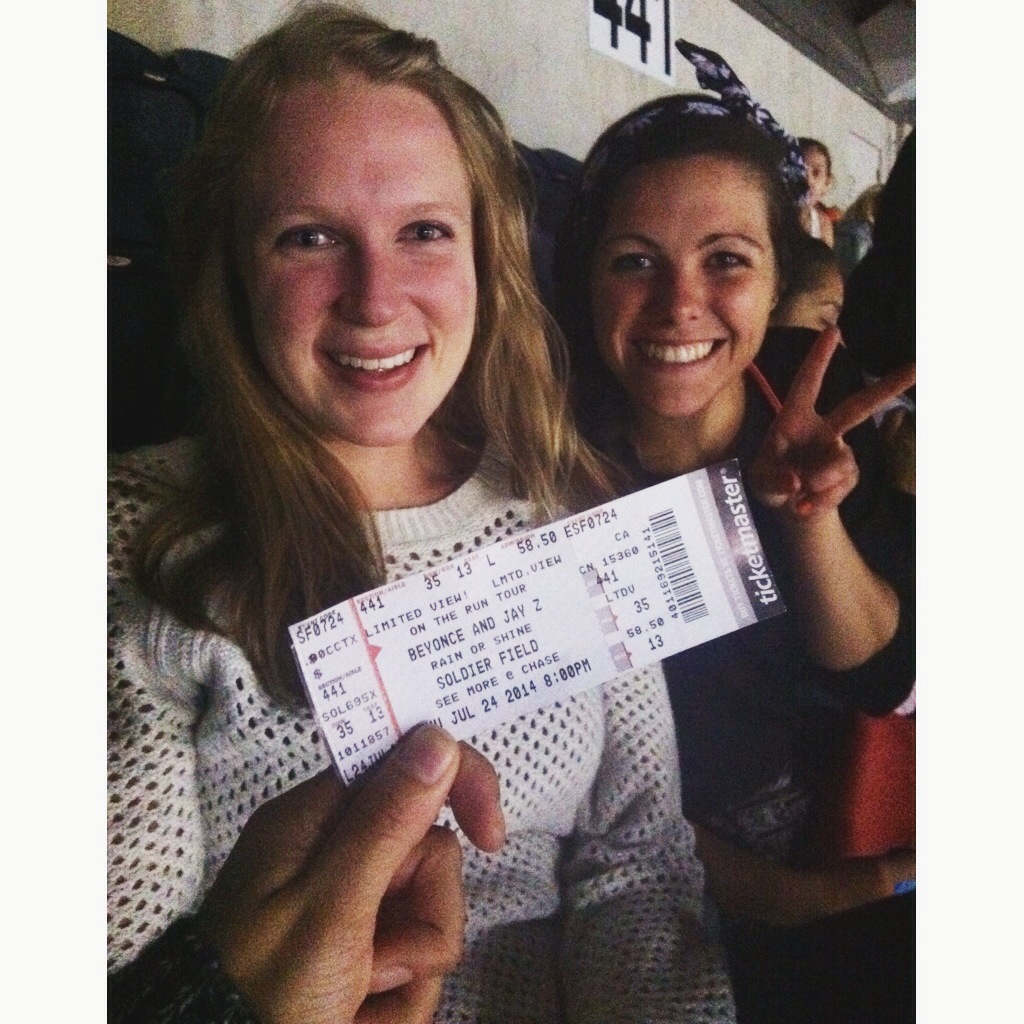 Ah so last night I got to cross a pretty awesome thing off my bucket list – a night of dancing and singing away to Queen B LIVE. Beyonce and Jay-z’s On The Run Tour was at Soldier Field here in Chicago, and Becca, Anne, and I made the spontaneous decision to go!

Our original plan was to go check out the area and hopefully hear some of the music from outside the stadium while chit-chatting by the lake. As we were jammin’ to my Beyonce Spotify playlist before we headed out, we got around to thinking maybe we should go get cash out just incase the opportunity presented itself outside the arena and we found a deal on some seats.

**Disclaimer: Per the note of spontaneity above, I do not normally wear legit winter sweaters and unruly hair to concerts, as you will see in some poor quality iPhone photos (which I also apologize for), but I was trying to prepare for that chilly lake breeze. Ok, back to the story.**

Well, that was the best decision ever. We got closer and the crowds around us were glammed up and buzzing with excitement. Suddenly, I saw a man ask, “Anyone need tickets?” I stopped to check how much – $150 each…I couldn’t do that to my poor wallet.

I wasn’t giving up that easy, anyone who knows me well enough can tell you how much I absolutely love me some Beyonce (and Jay-Z, but I mean, mostly Bey). So I tell him, “We need 3 and we only have $300 together, that’s all we can do.” He hesitated and began to shake his head, so I quickly reminded him, “You’re probably just going to lose the whole $450, the show starts in 20 minutes.”

That did the trick, my friends. Oh, I know, sounds like it could be sketchy right? Thankfully, a nice guy and his friends had just gotten tickets from the same man and a couple of them who went ahead confirmed on the phone that they were able to get in. And ticket man walked with us all the way to the gate. So we just really lucked out. 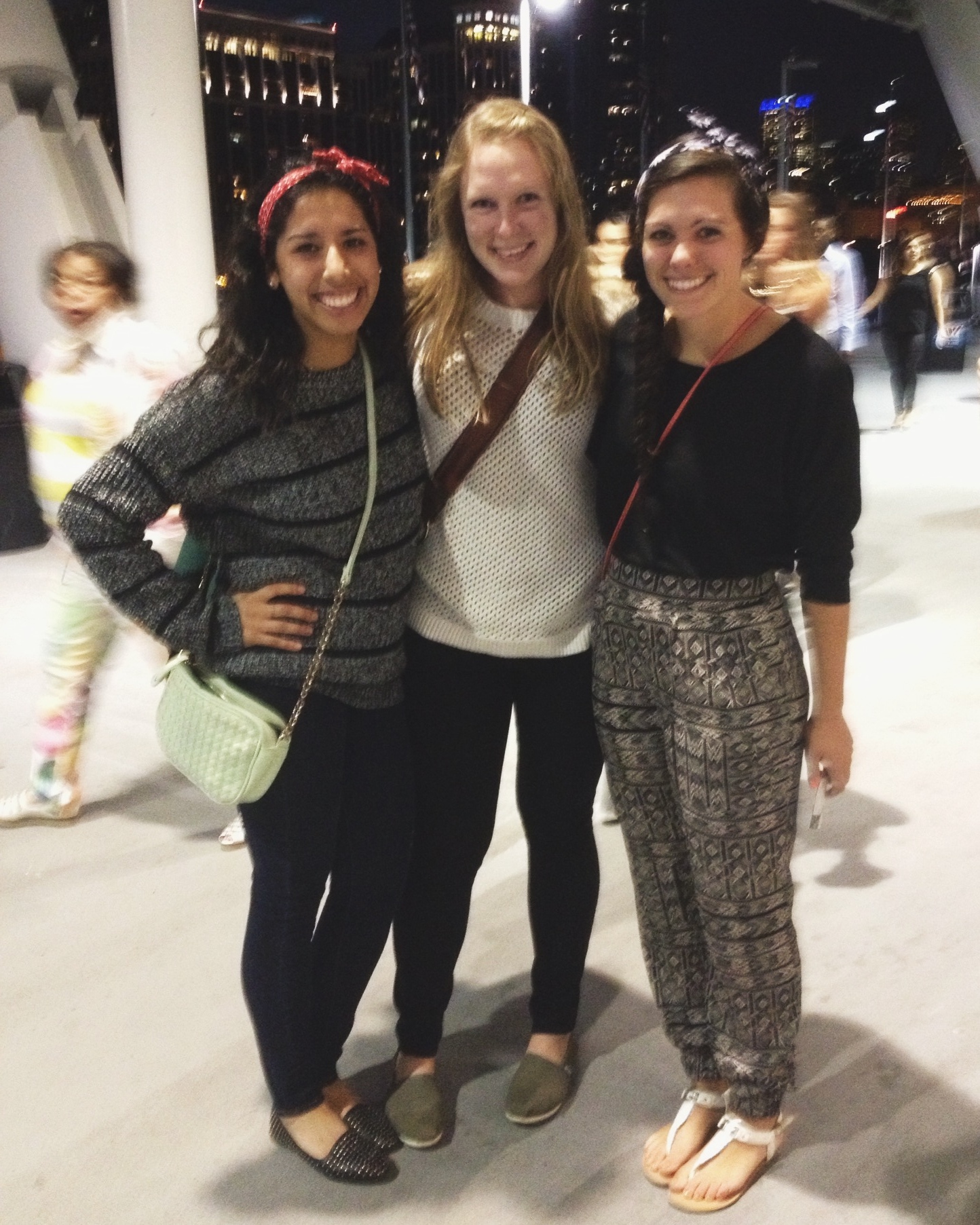 So blurry. So sorry. So much excitement. So little time to find our seats.

Weeheee. Then the real magic began. We made our way to our seats, which were surprisingly impressive even though it seemed like we climbed Mount Everest to get there. The best part though was that once the show started, it seemed kind of like a free for all. So before I knew it, I was standing with a crowd of people on the second level, smack in front of the stage. 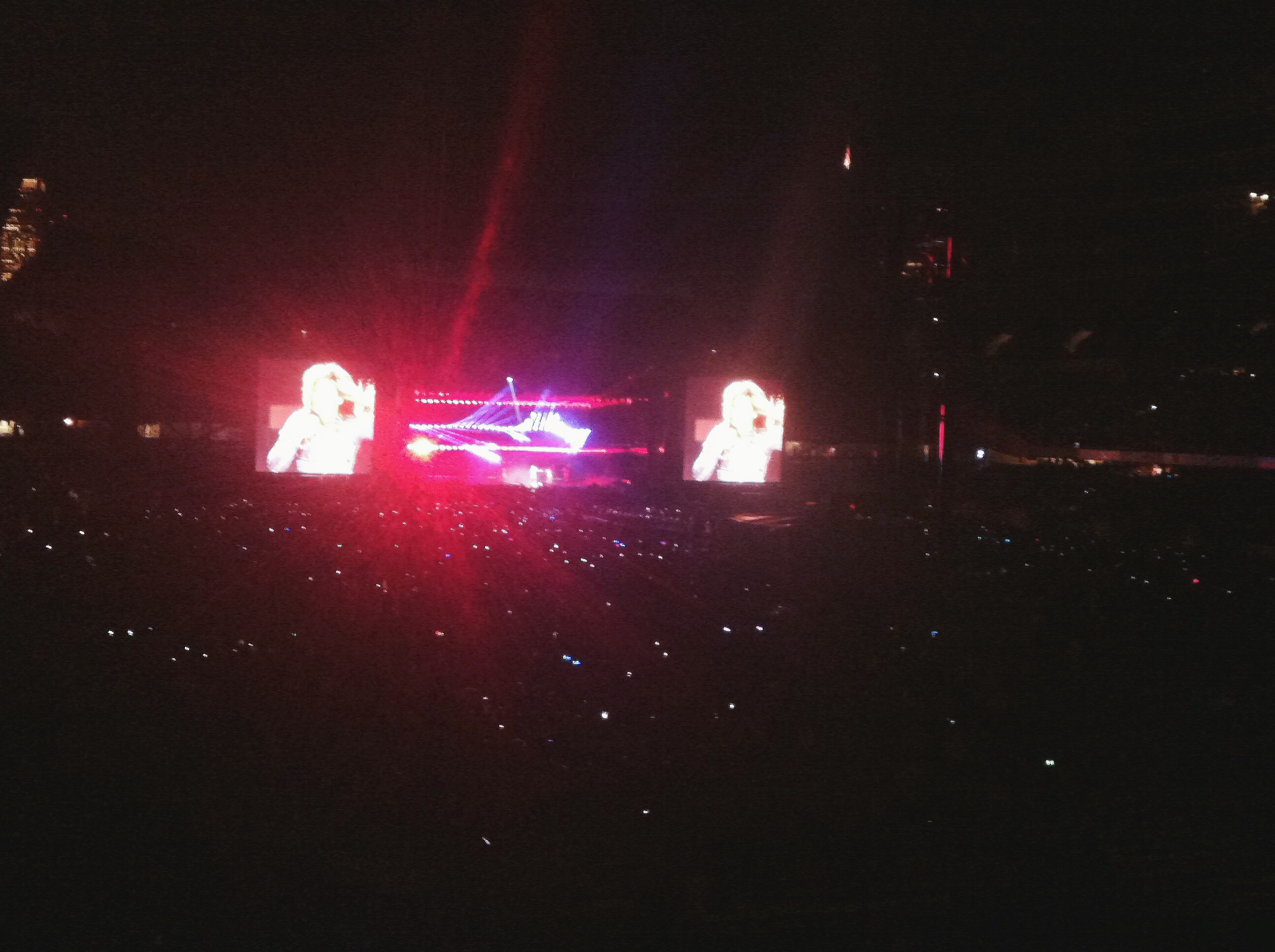 Um terrible quality, but I need some sort of proof!

The show was INCREDIBLE. I will never get over how fabulous and fit Beyonce is. Girl has got serious moves and works a concert wardrobe like no other. Anne and Becca were giggling as I sang along to  every song and bumped hips with this cool New Yorker named Frenchie on the other side of me. Jay-Z was pretty awesome himself – rocking the beanie, sunglasses, chains, and signature “yuhhhh!” shout-outs.

The video footage on the screens that went along with the whole criminals-escaping-the-law theme had the audience in awe and the show ended by playing the emotion card – a wedding video, sweet footage of baby Blue Ivy and her parents being adorable, and traveling the world and such. Can the Carter fam adopt me for a second so I can sail the ocean on a yacht too?

And just incase I needed one more thing to love about Queen B, let it be known she is proud to come from the Lone Star State and gives it so much love during her concerts! So many of her songs already mention H-Town, but at one point in the concert she shouts “I’m from Houston, Texas, and we like to get down over there, I need to see y’all get down.” Later, she came out with a leather jacket that had “TEXAS” bedazzled on the back. Of course I was cheering with pride every time and my roomies yelled the most Texan thing they now know from this summer, “Hook ’em Horns!” I’ve taught them well haha. 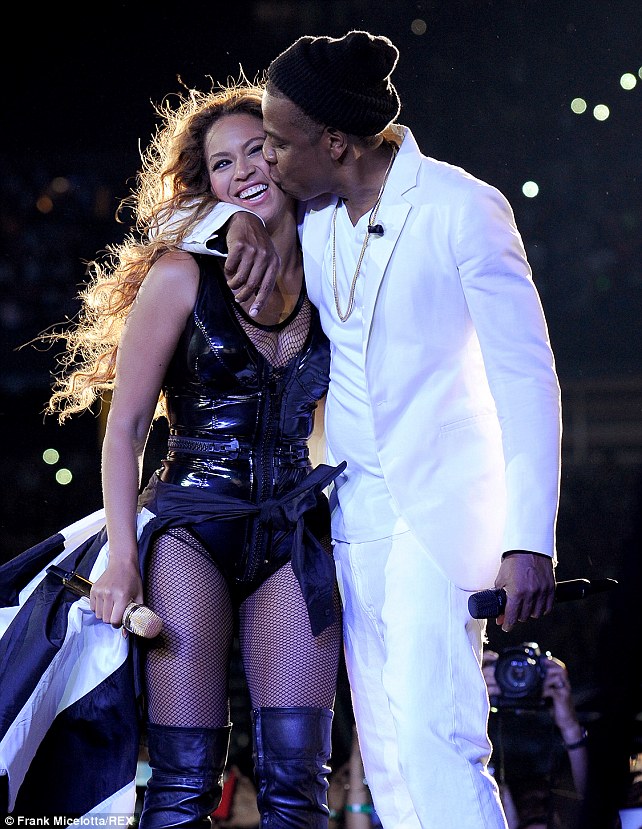 From their show in another city, but the similar scene I saw last night 🙂 – Image courtesy of the Daily Mail.

Walking home, we couldn’t stop gushing over the whole night. I am so thankful for spontaneous, fun-loving, good hearted girls to have been spending my summer with. What an opportunity to see a power couple perform, in this famous stadium, in this beautiful city!

Cheers to the weekend…and some time to catch up on sleep!